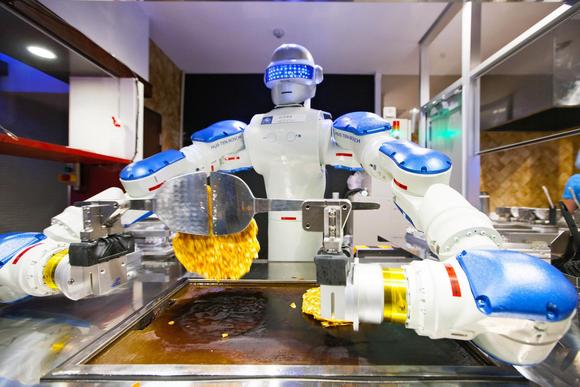 Weekly Gleaning 9/21: Down and out in the robot kingdom

Every week we’ll be collecting relevant news, web features and publications from the world of culture and agriculture. From this past week: the microbiopolitics of resistant bacteria, plant blindness, and the latest in agri-business consolidation.

There’s been quite a bit happening in the past week amongst the upper echelons of agriculture. In the latest in microbiopolitics, heads of state around the world committed Tuesday to coordinated action on antimicrobial resistance (AMR). Based on the FAO’s action plan, the draft declaration calls for stricter regulation and surveillance of agricultural practices (70% of antimicrobials are consumed by livestock). Heather Paxson’s work on artisanal raw cheese producers serves as a useful starting point for engaging and theorizing such developments. At the same time, a new study demonstrating that applications of endophytic microbial communities can increase drought tolerance also shows that Post-Pasteurian practices are not necessarily restricted to the local and embedded; this particular research is on poplar tree plantations destined for cellulosic ethanol (i.e. biofuel) production. Also worth keeping an eye on is the BioAg Alliance formed by Monsanto and Danish biotech company Novozymes, which has mostly flown under the radar so far.

Of course, Monsanto’s acquisition by different European corporation continues to spark discussion. The Wall Street Journal has an article (unfortunately behind a paywall) on the implications for EU regulatory policy. There’s also a timely short film co-produced by Neil Young about an Alabama farmer’s legal battle with Monsanto. Secretary of Agriculture Tom Vilsack also weighs in on the acquisition, with the familiar maneuver of turning a question about consolidation of power into a response about “innovation”. Dominic Glover has written in the Journal of Peasant Studies about such narrative shaping for GM crops, and Holmes and Graham have explored the portrayal of GMO’s as “public goods” in Colombia. In other transgenic news this week is the largest study to date of pesticide and herbicide use by farmers growing GM maize and soy (pesticide use down; herbicide use increases w/ weed resistance), and a new technique that increases the range of crops that can be modified. Supplement these with articles on the anthropology of genetically modified crops and bio-hegemony in Argentina.

It’s a low point in the ag cycle, and conditions are ripe for consolidation. Besides Monsanto and Bayer, two of the largest fertilizer producers – Agrium and the Potash Corporation – also announced a merger. Last Thursday, 37 companies launched the Global Agri-Business Alliance. See Kendall Thu on consolidation in agriculture and centralization of political power.

The US Trade Representative Office is contesting Chinese price supports for domestic cereals, saying that they have breached WTO commitments and are hurting US farmers. Of course, subsidized US cereal production and export has itself been historically disruptive to local food and farming systems around the world, as shown in Seth Holmes ethnography of indigenous Mexican farm laborers Fresh Fruit, Broken Bodies (overtime pay for farm labor in California was finally signed into legislation on Monday).

That farmers are often compelled to make decision based on the rhythms of the global market (e.g. ag cycles) rather than agroecological rhythms is perhaps related to what Kathryn Williams has called plant blindness (also see Williams and Mung Balding’s recent article and a new study showing that gardening as a child has lasting effects on diet). On the other hand, Jan Douwe van der Ploeg’s article in the new issue of Farming Matters demonstrates how peasant farmers read their farms through a “range of complex and interdependent cycles of observation, interpretation, readjustment, evaluation and learning”.