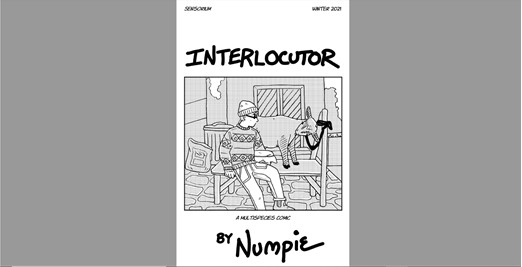 The comic zine you are about to read is a kind of experimental, still-frame ethnographic film. Drawn (literally) from my master’s field research on raw milk in the state of California, I produced this in the hopes of productively expanding upon the more recognizable forms of visual anthropology: photography and film. I join a rising wave of interest in the potential for comics and graphic novels to convey the findings of qualitative research in the social sciences, signified by the launch of University of Toronto Press’ EthnoGRAPHIC imprint in 2017. Interlocutor follows my efforts to conceptualize and execute a multispecies research project in which I situate non-human participants alongside my human interviewees as equitable contributors to the project. It asks questions about the field of anthropology by exposing practical limitations in performing this research, all while depicting my messy meetings with three warm, breathing beasts: the goats Lapis, Jasper, and Copper.

During my research, I had a daydream of making a short film exploring these issues, but lacked both skill and experience in filming and video editing. Instead, I turned to my longtime illustration and cartooning practice, which became a viable and intriguing alternative. When my committee chair responded enthusiastically to my side-project with the comment: “in a comic, the goats can TALK!” I immediately hated the idea. I was aiming for a tone more akin to serious, nonfiction graphic novels, like Joe Sacco’s famous “comics journalism” (Palestine, Paying the Land). As I sat with this tension, however, possibilities unique to the comics form began to reveal themselves to me. Instead of English-speaking goats that undermined the very points I was trying to make in my research, I ended up with goats that occasionally speak with pictograms of their desired treats, or with a dotted-line speech bubble that subtitles the meaning of their actions as I clearly understand them. As the complete piece developed, the designs took on a playful, rude, and spunky aesthetic that was inspired by spending time with the goats, and would look at home on shelves alongside indie comics and punchy, D.I.Y. zines.

I turned to folklore for my master’s degree in part because the discipline contains an established tradition of public folklore, and I am interested in conveying anthropological research to broader audiences. Similarly, comics allow me to leverage a vernacular form: the American public is generally more versed in its conventions than those of, say, the academic conference paper. Illustration, graphic novels, and similar mediums offer a great deal to the ethnographer for the purposes of “writing up,” allowing information to be presented in vivid, multisensory ways. Such projects also raise challenges inherent to addressing multiple audiences simultaneously: how should I employ jargon that is specific and useful, without alienating the reader? How can I remain compelling to theorists, while also engaging the curiosity of bookstore passers-by? For the non-anthropologists, I hope you read this and experience a pleasant sensation of “being tricked into reading a school paper” (actual feedback I received on a draft). For the ethnographers, I hope Interlocutor kids you a little, nibbles at your shirttail, and invites you to imagine wilder possibilities for future publications.

I’ll meet you there,
Numpie

Please note: This comic is best viewed full-screen (second icon from the right in the below taskbar).

Sharing, tasting, and wasting food in our...

Making a Neighborhood: Cow-Dung and Class in...