Interview with Sarah Davenport, lead author (with Joanna Mishtal) of ‘Whose Sustainability? An Analysis of a Community Farming Program’s Food Justice and Environmental Sustainability Agenda’, published in the latest issue of the journal. 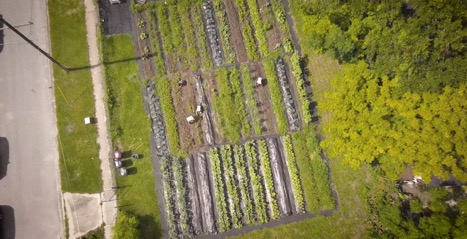 1. What led you to study sustainable farming, and the City Gardens program in particular?

Before I moved to Orlando in 2016, I was deeply involved in agroecology/forest gardening in Southwest Florida, where I grew up. I gravitated toward the environmental sustainability scene in Orlando where people who do all kinds of sustainable farming and environmental work in the Central Florida area, gather to learn about farming techniques, trade plants and food, network, and promote their causes. It was through this that I learnt about and eventually met people from City Gardens. At the time, I was volunteering with a grassroots nutrition education program in West Orlando (founded by black women and utilized mostly by black residents), and was beginning to learn about the long history of oppression of black Orlando residents through food and environmental injustice. I had started to work with Joanna, my faculty advisor at the time, on a project that critically examined the environmental sustainability movement in Orlando. When I heard that City Gardens was planning to expand their sustainability project to West Orlando, I felt an imperative to think deeply about what that expansion might mean for black people in the area.

2. How does this article tie into your broader research agenda?

My research agenda is broadly concerned with black and brown liberation, food and environmental justice, and agroecology. This article is part of the foundation of my research agenda; it scrutinizes that which is taken for granted as “good” (sustainability) and brings light to issues which have long been neglected in black and brown communities across the United States. My research agenda is also based on an engaged approach. Through this project, Joanna helped me develop an engaged methodological approach, which I have continued to refine and employ in my current research. 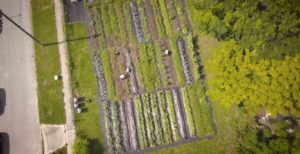 An aerial shot of a community garden run by the City Gardens program in West Orlando. Between the rows are volunteers and interns working on the plot.

3. Your critique of food sustainability initiatives builds on historical data about segregation and gentrification in one particular neighborhood. Why did you find this context to be overlooked, despite its significance?

There are plenty of reasons why violence against people of color is consistently ignored throughout the U.S. In Orlando, ignorance of this violence has allowed for developers to easily facilitate the demolition of black residences, businesses, places of worship, and to expand costly housing, entertainment and eating establishments, and leisure spaces for predominantly white and upper-middle class residents and tourists.

Some people in City Gardens did come to recognize the significance of the displacement of black communities in Orlando later in the development of their project. However, this knowledge did not impact the way the organization, as a whole, addressed food insecurity in the community. The reality is that they depend on support (land and funding) from some of the very entities that have displaced thousands of black people, disrupted the social fabric of West Orlando communities, and neglected to serve black and low-income resident’s basic needs. They would be taking a huge risk if they were to directly address food insecurity as a historically racial issue.

4. Several scholars have pointed to the neglect of racial and class inequalities in sustainable and organic food movements. Did your research reveal any progressive counter-examples?

This was the question that I ended on when I completed this project and what I’m now addressing in my current research project in the Lower Ninth Ward neighborhood in New Orleans, Louisiana. Lynn Nicholson, a longtime resident of Parramore in West Orlando, founded the Parramore Community Garden in 2008 and helped run the Parramore Farmer’s Market. Aminah Hamidullah, another resident of Parramore, is the founder of Knowledge for Living, a community economic resource and education center, which houses a garden. Hebni Nutrition Consultants is another local organization that addresses food insecurity and nutritional inequalities, among other issues, in Orlando. These are some of the many examples of black-led, grassroots organizations who address food injustices within the West Orlando community.

As my research endeavors have grown, I have begun to draw upon black feminist ideas to frame my work. Through this, I’m finding that there exist counter examples all around me, particularly in the everyday lives of black women and queer people of color. 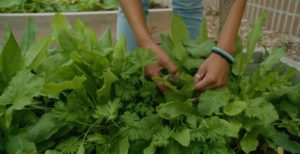 Sarah reaches into one of the raised beds created by City Gardens to harvest sorrel to share with her co-author, Joanna.

First, it is imperative that we engage in serious discussions regarding how the discipline itself has/has not supported research and knowledge by people of color who have inspired and sustained radical discourses and action surrounding food and environmental justice, environmental sustainability, sovereignty, liberation, racial justice, and the like. If we wish to have a legitimate impact through our research, we must engage in critical self-reflection that forces us to confront our own intentions in doing the research we do. Our role could be more engaged and we could start by asking ourselves: to whom is our research accountable and how might we make it so; if we are gathering knowledge to create more sustainable and socially just initiatives, to what extent/how could it be put into action; what are the real and long-term effects of the work we do; to what extent can we control this impact; and how willing are we to do the work of creating socially just, environmentally sustainable communities?

6. What can environmental studies programs – such as the ones many interns and employees of the program attend/ed – do to better address questions of race and class in their pedagogical approach? What scholarly work would you recommend?

This is a difficult question because it is not necessarily about what environmental studies, specifically, can do but what institutions of higher education, in general, can do. For example, every institution that the participants of City Gardens attended, including my own at the time of this study, is playing a part in the gentrification of predominantly black Orlando neighborhoods. Furthermore, institutions of higher education have historically denied educational opportunities to black and brown people. Perhaps what any academic program in higher education can do to better address questions of race and class is to begin with creating more space for underrepresented scholars in their programs and curriculums. Only from there can we begin to genuinely address questions surrounding race, class, and the environment.

Some texts I have been reading recently that have significantly altered how I think about food sustainability and access in my current research are by black women authors: Katherine Mckittrick’s Demonic Grounds, Ashanté Reese’s Black Food Geographies, Monica White’s Freedom Farmers, and Leah Penniman’s Farming While Black.

7. Why did you choose to publish the results of this important study in CAFE?

We published in CAFE because we wished to engage in interdisciplinary conversations about this topic and contribute to the advancement of CAFE’s mission by offering a critical race perspective on food, agriculture, and the urban environment. I believe that this publication also contributes to a growing body of research in CAFE that is politicizing sustainability work and addressing race, class, and gender issues within the environmental movement.

Interview with Sarah Davenport, lead author (with Joanna Mishtal) of ‘Whose Sustainability? An Analysis of a Community Farming Program’s Food Justice and Environmental Sustainability Agenda’, published in the latest issue of the journal. was last modified: October 21st, 2019 by
0 comment
1
Facebook Twitter Google + Pinterest

Assistant Professor – Sustainability and Equity – Energy and Resources Group and the Department of Environmental Science, Policy, and Management

Black Farming, Self Determination and Resilience: An...