Making a Neighborhood: Cow-Dung and Class in a “Digital Bangladesh” 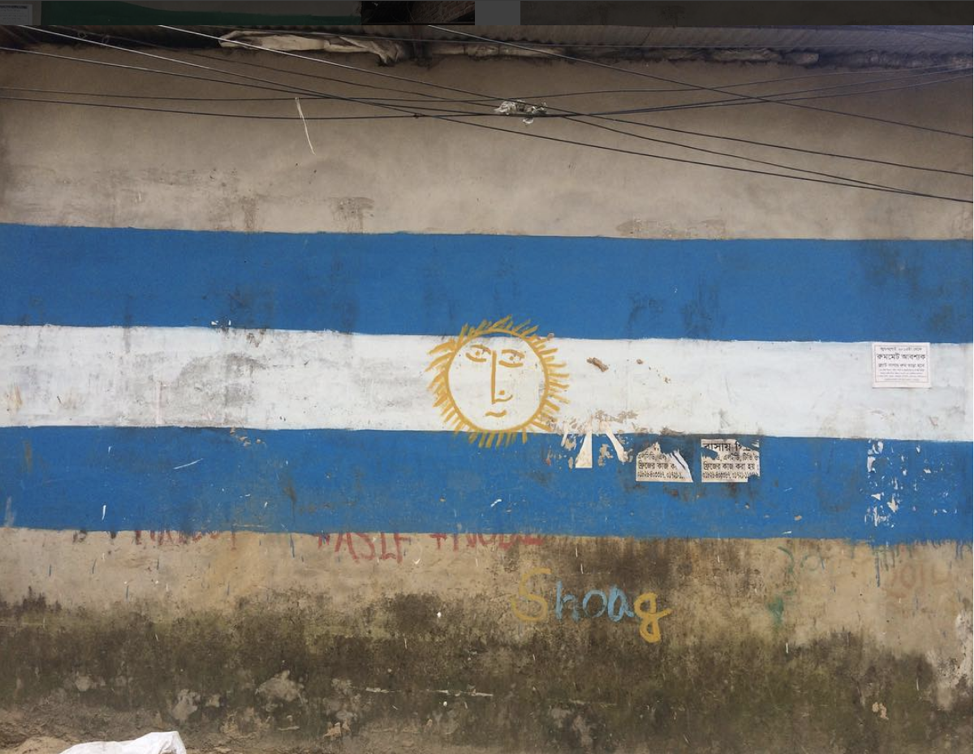 Amir Khasru carried on forward with a hustle, so that his body kept up with his rubbish cart, as he drew it down the smaller hill that was unavoidably central to the neighborhood. I call this neighborhood where he works Bithar. It is one of the most elite neighborhoods in Chittagong, Bangladesh’s second largest city and primary port-city.

Amir Khasru is in his fifties. He’s a thin man with a long beard, and a disposition that I thought was quietly devout. I was not surprised, then, when he told me that he used to spend his Thursday nights in devotion at the mazar, shrine, of Shah Amanat—one of the most well-known saints in a city known throughout its history to have been visited by a great number of saints. Amir Khasru originally moved from Comilla—the most populated rural district of Bangladesh—to Chittagong around 40 years ago. He previously had what was, for Chittagong’s urban poor, enough wealth to perhaps even leverage him into a different class. This loss of wealth was central in bringing him to his current occupation.

He moved into the neighborhood 14 years ago. After his loss of wealth, the komiti hired him as a night-guard. When they were looking for a waste-collector he offered his labor. The pay was better. He’s one of the oldest day-laborers in the neighborhood, and he complains often about constant pain in his calves from climbing up and down the neighborhood’s hills everyday for work.

He tucked his cart into an unpaved side road. His journey throughout the neighborhood was always punctuated by cigarettes, lit routinely at certain points. He lit one here.

Hearing his whistle, the almost always male caretaker, guard, or driver of the home would open the gate, and either carry out the garbage for him, or allow him to enter and bring it to his cart. They would often dump smaller bins themselves.

As Amir Khasru picked through his latest haul for recyclables, the guard of an apartment complex approached him. They conversed, glancing at a large red trash bin carried beyond the gate by another worker. Amir Khasru was offered extra money to take care of its contents, and so he approached it. They pulled off its lid. The smell struck me at some distance in a way that was almost disorienting. It was completely full of cow-dung, with a few coke bottles floating on top. The dung had originated from cattle sacrificed days ago for Qurbani, the popular designation for Eid al-Azha, the Islamic festival commemorating Abraham’s near sacrifice of his son. Qurbani occurred days ago, and the dung must have been sitting in the bucket for that long.

“There’s no water in it, is there?” Amir Khasru asked. The apartment’s caretakers said that there wasn’t. Amir Khasru returned to his nearly-full cart, resettling the garbage, so that there would be space for this new addition. The three men then lifted the bin together and dumped it into the garbage truck. Pouring it, dung-water spilled onto Amir Khasru’s shirt and lungi.

“You said there wasn’t water in it!”

He re-packed the older waste on top of the dung, to mask the smell. A trail of water leaked out from his cart. The caretakers brought out other buckets of waste, including pails of beef biryani. I had never seen so much food-waste in one place. They dumped those on top of the dung, as Amir Khasru reconfigured the space of the cart. 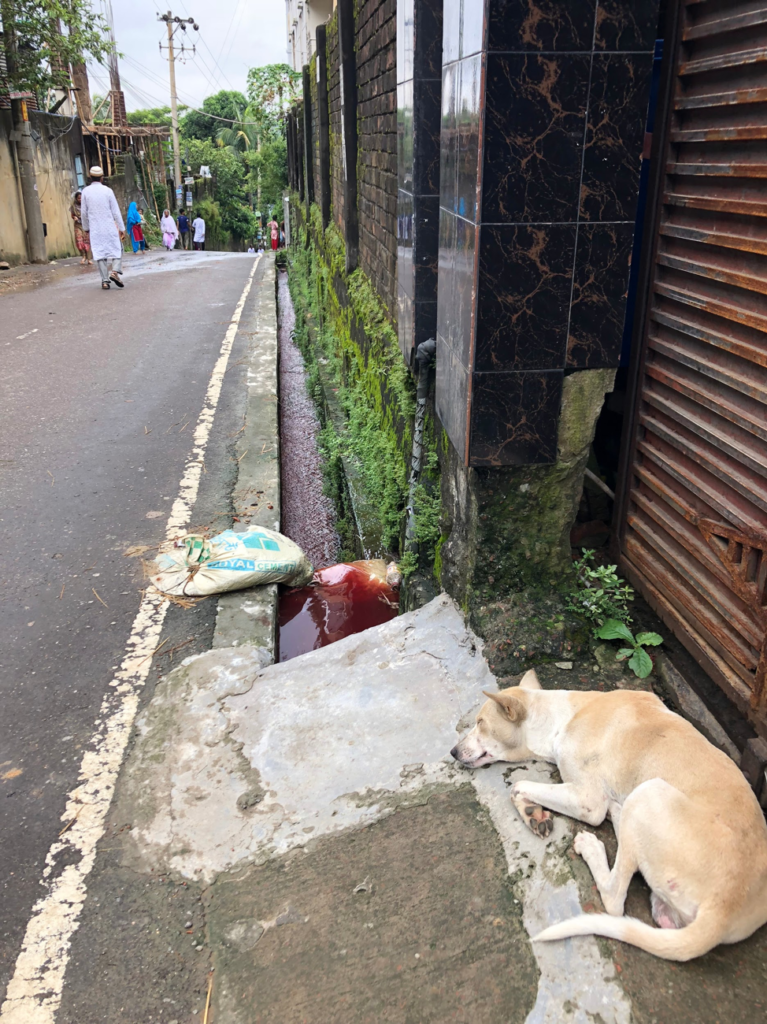 Bithar is in possession of what the geographer Asher Ghertner1 calls a “world-class aesthetic,” an aesthetic that aims to appeal towards the aspirations of urban elites, but incidentally earns the aspirations of non-elites. It can only embody this aesthetic because of the labor expended and exhausted by non-elites like Amir Khasru. For the working poor of the neighborhood, this labor constitutes the means and method of belonging in a space owned entirely by others and classed as elite.

Mehreener Amu, a former domestic worker, articulated this quite sharply. “They (the homeowning elite) don’t love us, they love our poroshrom, our toil. We stay here because they love our work. If we didn’t give them our work, they wouldn’t love us.” Poroshrom, toil is the embodied, felt, excessive and often painful avatar of shrom, labor. Because toiling is both made manifest in the body and is, as Anand Pandian2 illustrates, cultivated as an ethical disposition, it brings certain histories, actions, and self-imaginings into the body of the worker. A history of development—i.e. the future of the nation and the elite neighborhoods which represent it—can then be found in the laborer’s body. 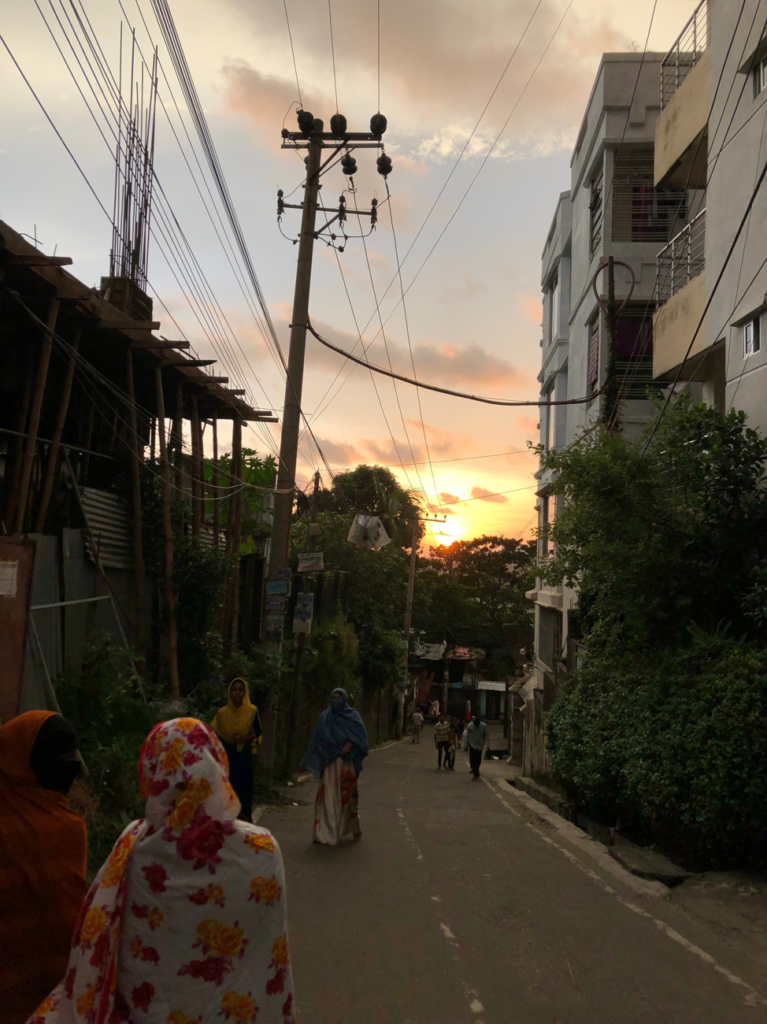 Bithar’s laborers have toiled to build and maintain multi-story apartment complexes, perennially stalled construction projects, and massive single-family mansions. Forested hills still linger in the background of certain locations, though some have been scarred from the toiling that precedes the neighborhood’s expansion. Behind the gates of Bithar’s large residential complexes, hidden from the streets, lie single-family servants’ quarters. Much flimsier gates or doorways protect circles of tin homes and single-story multi-room concrete homes. These smaller dwellings belong to those who are employed by Bithar’s elite residents, though not every household contained a member currently employed by them. It was common to see the older female member of the household employed as a domestic worker, and the male as a driver or caretaker. Rickshaw driver husbands were also common. These men often waited in a certain intersection of the neighborhood, charging their customers fares fitting of class status, something they could easily visually identify. Most of these laborers are rural-urban migrants, often from districts within the Chittagong division: Comilla, Noakhali, or elsewhere.3

Bithar was developed into this world-class space at the start of the 2000s. Many of its working poor residents have lived there since and prior to that time-period. At that time, it was characterized simply as a land of hills and forests—words used interchangeably to denote wilderness. Much of the land on these hillsides cannot maintain dense inhabitation, and thus, remains heavily forested. “Hill-cutting”—the leveling of hills—made this space, like many other locations in Chittagong, habitable. Bithar Hill has been cut to death. Elites and non-elites alike, now consider this space to be particularly beautiful and modern—always coupled, and modern always stated in English. 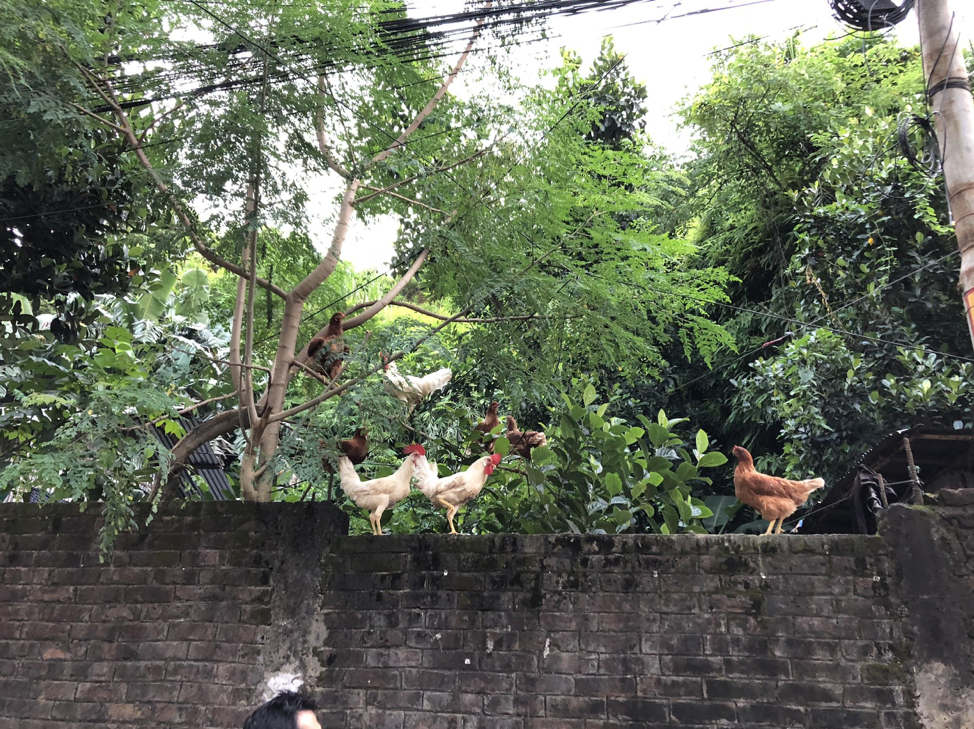 This contrast came up in a conversation I had with Shaful, one of my closest friends in the field. He was the best friend of Shorif, a driver whose family hosted me. Shaful initiated a story about his life and struggled to bring the others in Shorif’s home to attention, evoking the first word of his narration, again and again. Eventually, he carried on, despite the fact that conversation rang on behind us.

“In those days, I used to have to walk all through the hills collecting cow-dung. I’d bring them to my mom and put them on sticks to make firewood. That’s what we used for fuel because there was no electricity here at the time…. Now there’s electricity, now it’s “Digital Bangladesh.” That’s what Sheikh Hasina says.”

Digital Bangladesh is the ruling Awami League party’s vision for Bangladesh’s technologically advanced future. Yet, for Shaful, it is an amorphous symbol of development and futurity—of which the modern Bithar obviously fits within.

Shaful and I had this discussion only after he said in a teashop down Bithar’s steepest hill, “You should interview me.” The location of this teashop marked the end of Bithar. It was where it met Narikelbari Bazar—the neighboring marketplace.

“I have onek itihash—a lot of history.”

This is the second time that someone in the neighborhood insisted to me that they had a lot of history. In both cases, the expression struck me as odd. They were directed towards lower-class youths, who did not, to me, seem as if they were in possession of radically unique histories. It brought to mind a phrase that so significantly framed Nayanika Mookherjee’s The Spectral Wound.4 In this book, her interlocutors, Bangladeshi victims of rape during the liberation war against Pakistan, insisted that they were in possession of “mela itihash, chorom itihash, a lot of history, a severe history.” Throughout this book, she investigates just what it means for someone to claim possession of “a lot of history.” She finds this history embodied in the everyday—imagined into and intertwined with broader narratives of national history. From my conversations with Shaful, I view this history of digital Bangladesh to be embodied within him.

The laborer on the elite’s behalf, must deal with the dirty, fleshy, and bodily—the things that, as Radhika Govindrajan5 makes clear, can physically and ethically mark their bodies. By mediating between elite and fleshy, the fleshy can become invisible to the elite. These bodily things unfold on and through the body of the laborer, and thus, bring the laborer into possession of the history that precedes the nation’s future. 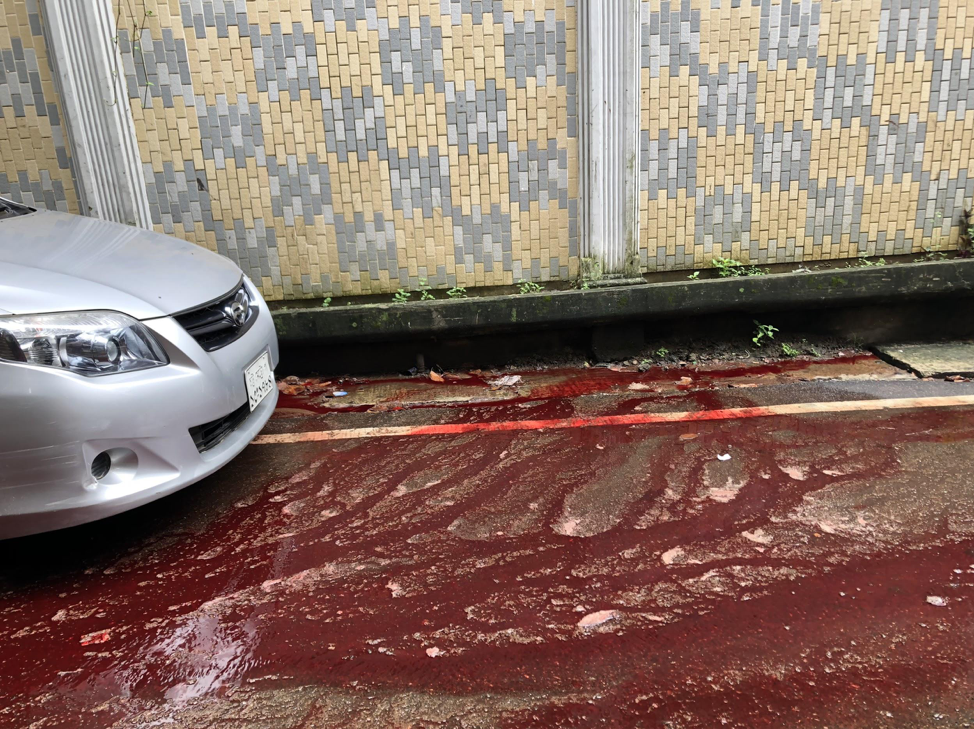 Amir Khasru’s labor mediates between animal body and elite resident. Bithar’s elite residents can engage in what is considered an elite lifestyle. They can have feasts and waste good food. They can purchase giant, often foreign cattle for Qurbani. They can consume so much meat as to be a physically distinct class. Although materially dependent upon the animal, they do not have to deal with the unusable, undesirable and fleshy parts of the animal itself. Amir Khasru deals with that. Yet, by taking on the development of elite space in his pained calves, his soiled shirt, Amir Khasru can situate himself in a space that is classed as elite. He was the only person I know in Bangladesh who claims to not know how to use a phone, but he is not outside of the bounds of Digital Bangladesh.

It was Shaful’s work in his childhood to collect dung to power his home that allowed the first settlements of Bithar to be maintained. These settlements then, provide the groundwork to make Bithar a place that could be leveled, developed, electrified, and thus, part of “Digital Bangladesh.” Following a series of unfortunate family situations, Shaful now lives with his brother in a small cement home that they rent in Narikelbari’s Bihari—“stranded Pakistani” colony—a location for the descendants of Urdu speakers who left India during partition to join East Pakistan. He resents living there. He socializes and works in Bithar, in a Western-style bakery that he did not have the education qualifications to be employed at, but through persistence, got the job. Toiling to make Bithar has made Shaful a possessor of its history, and, by extension, of Digital Bangladesh’s history.

It is significant that futurity in Bangladesh is articulated as a process of digitization. We often imagine the digitized as possessing the ability to transcend physical form, finding no use for the bodily and the fleshy. Yet, Digital Bangladesh’s body has felt, amongst other things, cow-dung. Laborers toil to hide such undesirable materials from elite view, and that embodied encounter allows for self-aware claims to progress’s history.

I complained to Shaful on Facebook about the process of writing up the paper that this research produced. He asked me, “amar history niye ki korlan,” “What did you do with my history?” 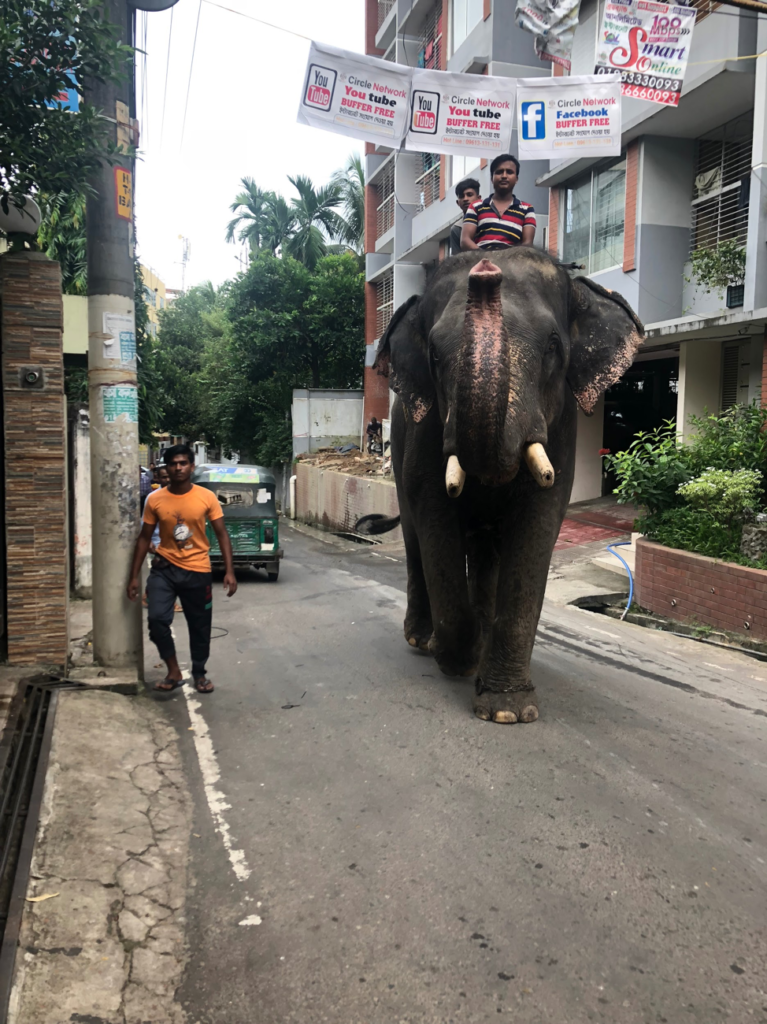 Sharing, tasting, and wasting food in our...