Sharing, tasting, and wasting food in our mother tongue 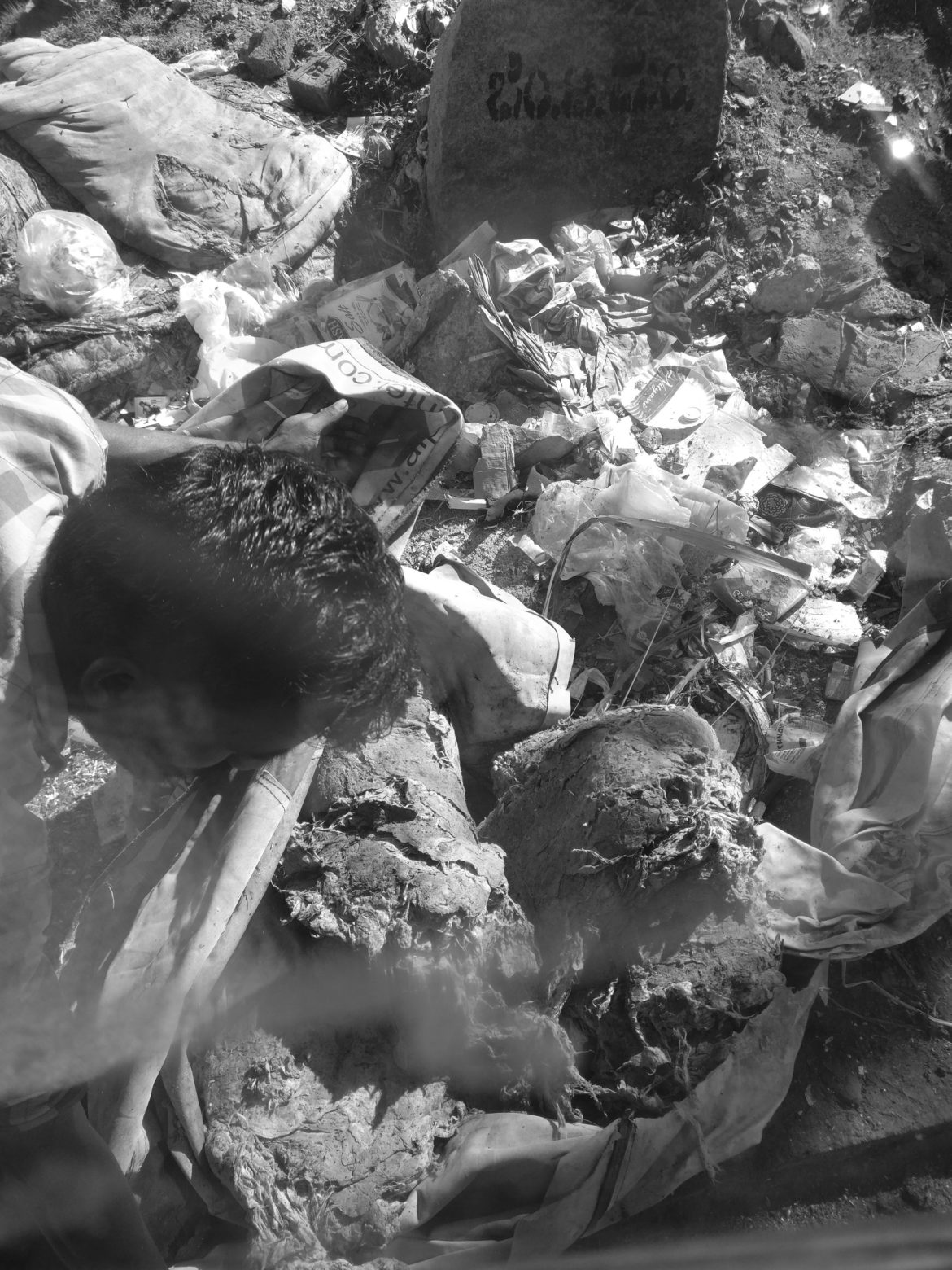 I want to tell you what people say to each other in my mother tongue—Kannada—as they share and squander food. I use daily sanitation work in Bangalore, sweeping and garbage collection that starts at the break of dawn, as the setting for my narrative.

While Kannada is the most spoken language in the city, dense pockets resonate with Tamil, Dakhini, Telugu, Hindi, and English. The majority of Bangalore’s sanitation workers speak Telugu as their mother tongue, although there are some that speak Tamil. A growing number speak Hindi and Kannada with a heavy North Karnataka accent.

One’s mother tongue places one in the city. In doing so, it shapes what s/he eats, and how s/he eats.

How do the tongues we are born with become organs of power?

The tongue (naalige) is a double edged sword.

It tastes with deliberation so that we can wisely sort out nourishment from poison. But when desire grips us, when we need its wisdom the most, it lashes out impulsively. Devara Dasimayya, a 11th century Kannada poet from a modest weaving caste, illuminates this paradox in a vachana (mystic utterance):

and bring the poison down,

You may have missed Dasimayya’s riddle in translation. The serpent he names in his verse is a python (hebbaavu), a creature that kills its prey not with venom but with constriction. However, it gladly uses the venom already brewing within us, squeezing and secreting it to full effect.

An emaciated mother tongue is like a hungry serpent. Once it tastes desire on our lips, it reaches out of our mouths and strangles us, turning the food we put in our belly into venom. 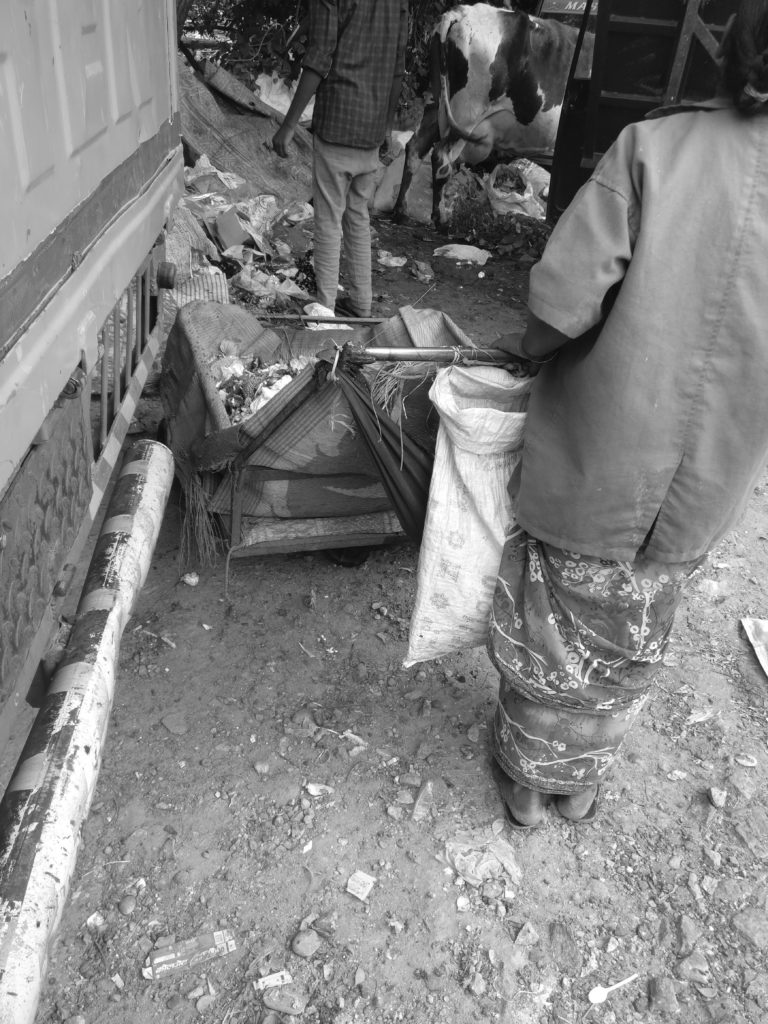 “It feels like someone is squeezing my stomach (hotte kivuchdangaagutte) when I have this food,” says Taiamma to me, “they don’t wash the rice (anna) and vegetables (tarkaari) before putting it in the pot. I eat this fearing the supervisor’s (mesthri) tongue.”

Taiamma works as a contract sweeper for the Bangalore Municipal Corporation. She speaks to me with a plate of coagulated rice and vegetables in her hand. In 2016, the state government mandated that all sanitation workers be provided with hot late morning meals (bisi oota).

She wonders if it is another opportunity for her supervisor to siphon off money. “In the end, they throw gravel into the rice that we eat (konege namma annake kallu hakodu)”

“Is he looking?” she asks me, as she empties her plate into a nearby gutter. “son of a dog, (naayinanna maga) he says whatever comes to his mouth (baayigebandange) when he works us. I’m his mother’s age.” 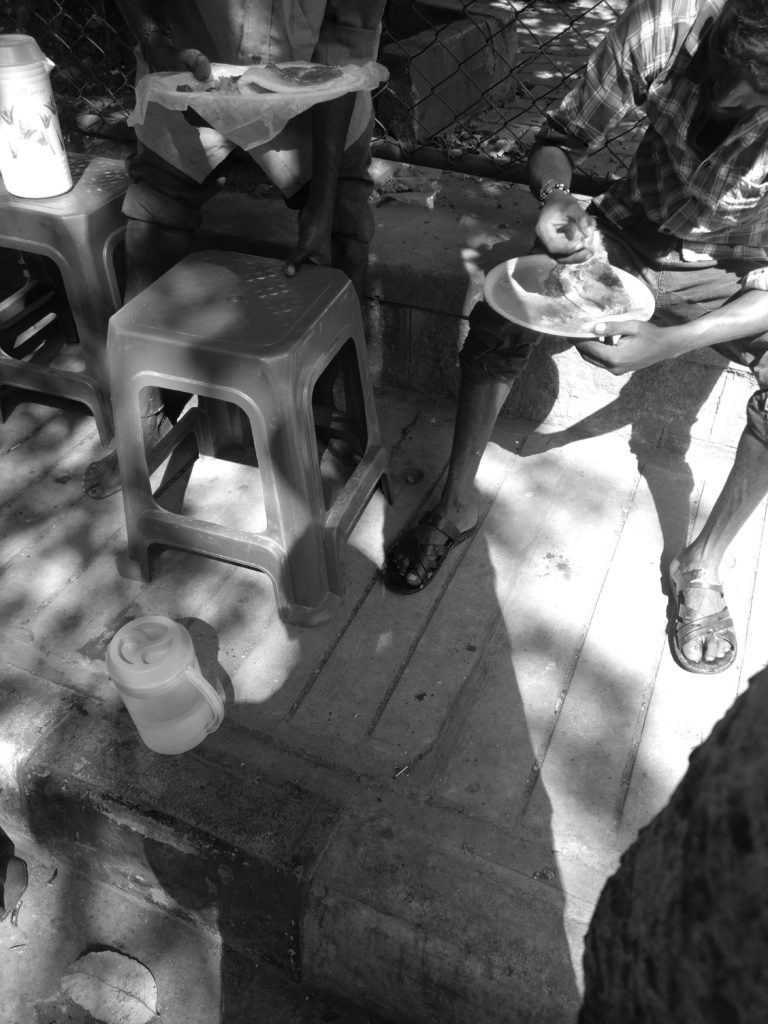 “She is from Penukonda in Andhra, just like us” Narasimha says, flashing a smile at me and the woman who owns the street cart. She smiles back at us as she spreads dosa batter on her sizzling pan. We are sneaking away from our morning route to have breakfast at a corner food stall. “Try the gongura chutney,” he says, “it will light your tongue on fire. You can’t handle the chili we have back home.”

The woman cracks an egg on the dosa, now roasting to a fine crisp. The smell of ghee fills our nostrils. One look at Narasimha and I can tell that his mouth is watering like mine. “I’ll just have one egg dosa, I have to stomach some of that rotten food (haaladdoota) later,” he says with resignation, “our supervisor knows that we’ve been skipping our meals. The rumor is that they will cut 25 rupees a day from our salary to fund the meal scheme.”

I reach to pay for our breakfast but the woman refuses. When I insist, Narasimha remarks, “don’t bother, she won’t take money from us. Every cart on this street feeds me for free, so long as I pick up their garbage. Besides, she doesn’t understand Kannada.”

He signals me to get into his tipper-auto and we drive off to the next street.

Morning garbage routes are one of the few public instances when the city’s inhabitants share food outside of religious occasions and private charity. 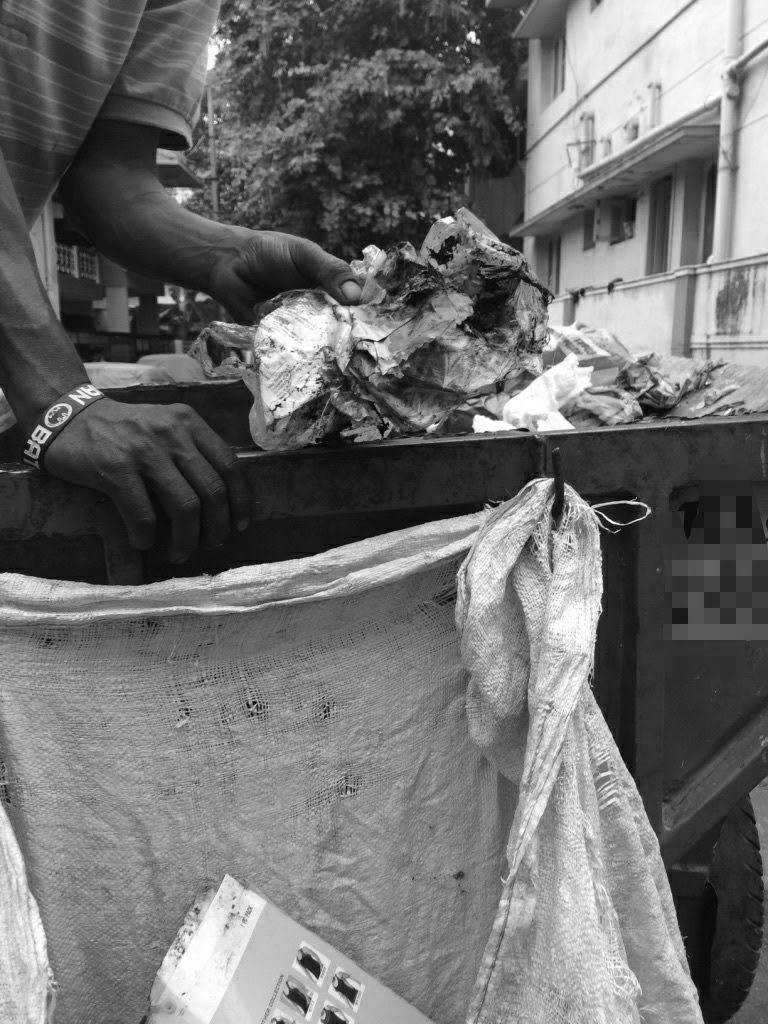 Garbage disposal is also the most public, acceptable, and routine means to squander food.

Some days later, Ranga stands in the courtyard of a women’s hostel. He slogs through buckets of putrid biriyani with his bare hands, separating plastic liners from heaping piles of rice and meat. The city has mandated that all household waste be segregated. “Sir, do you speak Hindi?” he asks me. I nod. “I need you to tell the warden lady that this is too much work, and it reeks of week old mutton. Either she pays me a tip or I’m leaving this to rot here.”

We walk up to the warden’s quarters and ring the bell. Her assistance answers the door. He tells us in broken Hindi and Bangla that she is not around.

Bangalore is a city of many mother tongues. You often have to speak in another tongue to get your next meal. But you can always squander another’s meal in your own. 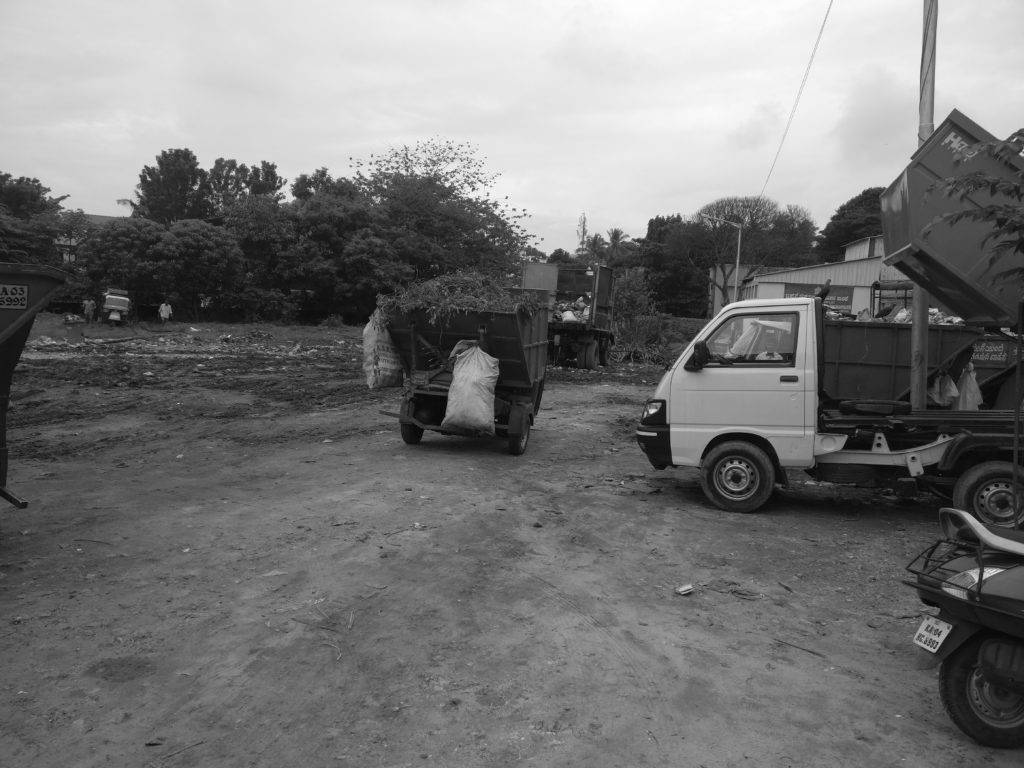 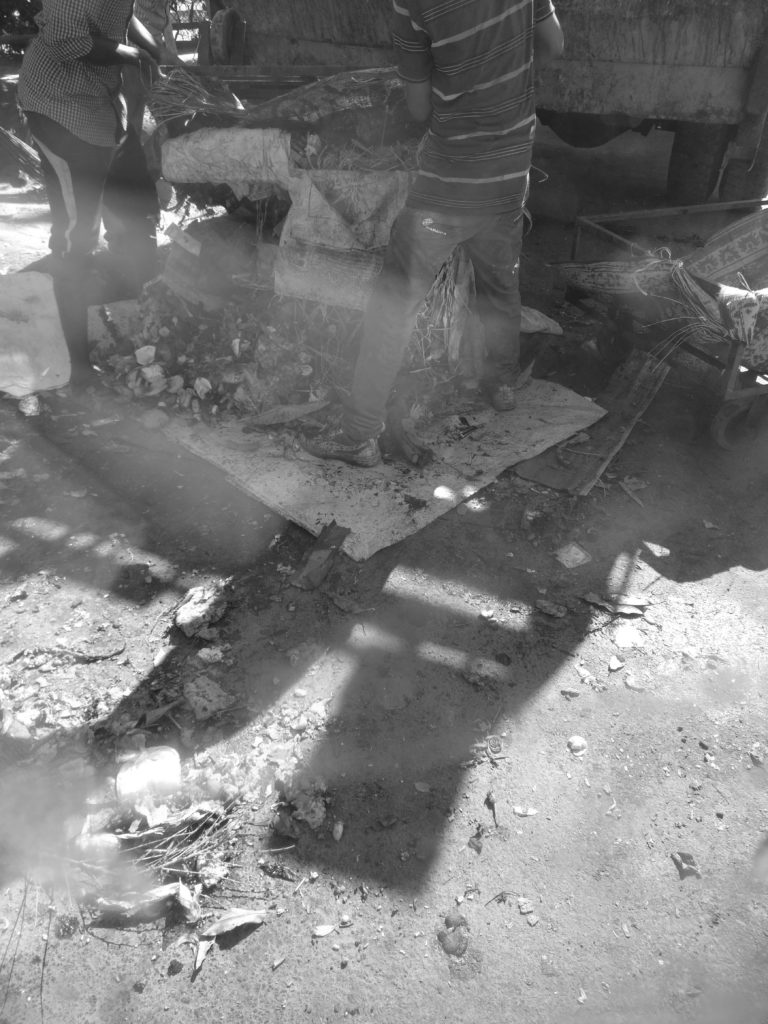 It’s close to the end of the work day as Krishna drives into the ward compound with a tipper auto filled with wet waste.

“Vegetables, vegetables, come on over, madams (medamgula),” Krishna yells, teasing the women sweepers as he brings in a load of produce from the local Big Bazaar supermarket. Soon, a crowd gathers around his vehicle as he pours his collections onto the floor, picking out fresh onions, tomatoes, radishes, and brinjals from rotten ones.

“The boss wants us to put all of this produce into the new biogas chamber. He gave out the contract to some NGO,” he says.

“Put a fire in his mouth! (avana baaige benki haaka),” mutters Pavitra, as she picks through the pile, “he hasn’t paid us for months.” 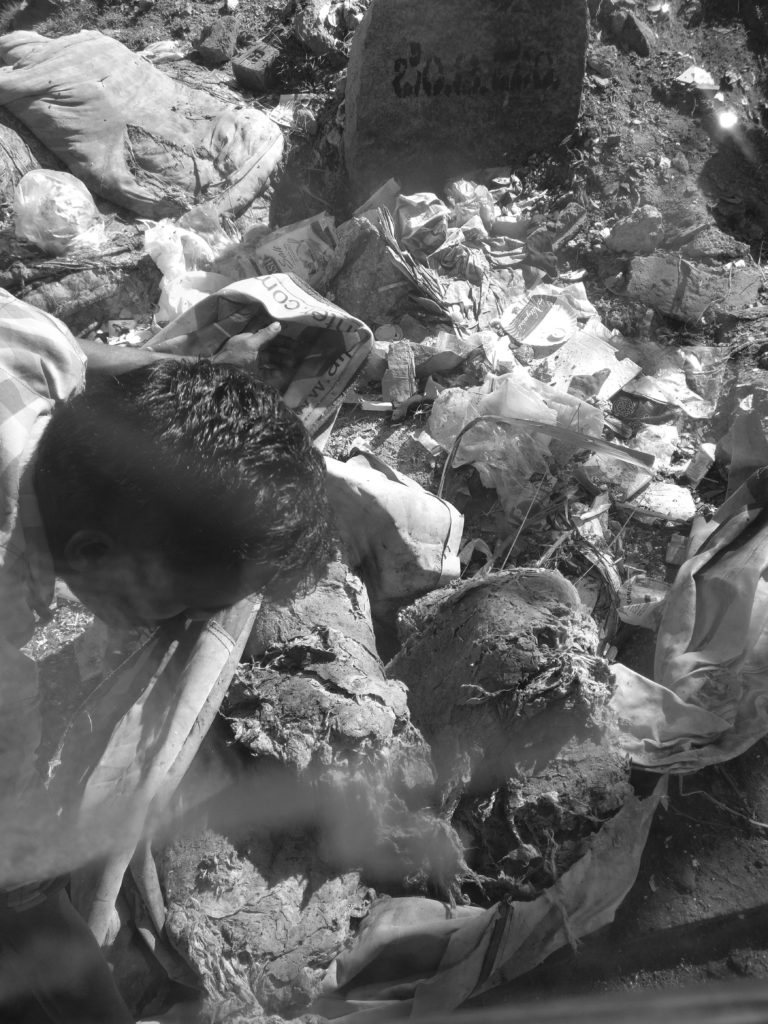 “Eat it, it’s actually good”, “it’s good”, “it’s still good”, or if all else fails, “take it, it’s holy sacrament (prasaada).” This is what Raju hears each time residents toss him a polythene bag filled with leftovers.

One day, a resident tossed him a polythene bag of prasaada twelve days after Ugadi.2 Raju threw it in with the rest of the garbage as the resident watched. He turned to me and said, “who does that bastard think he is? He tosses the damn thing to me, without touching me.” 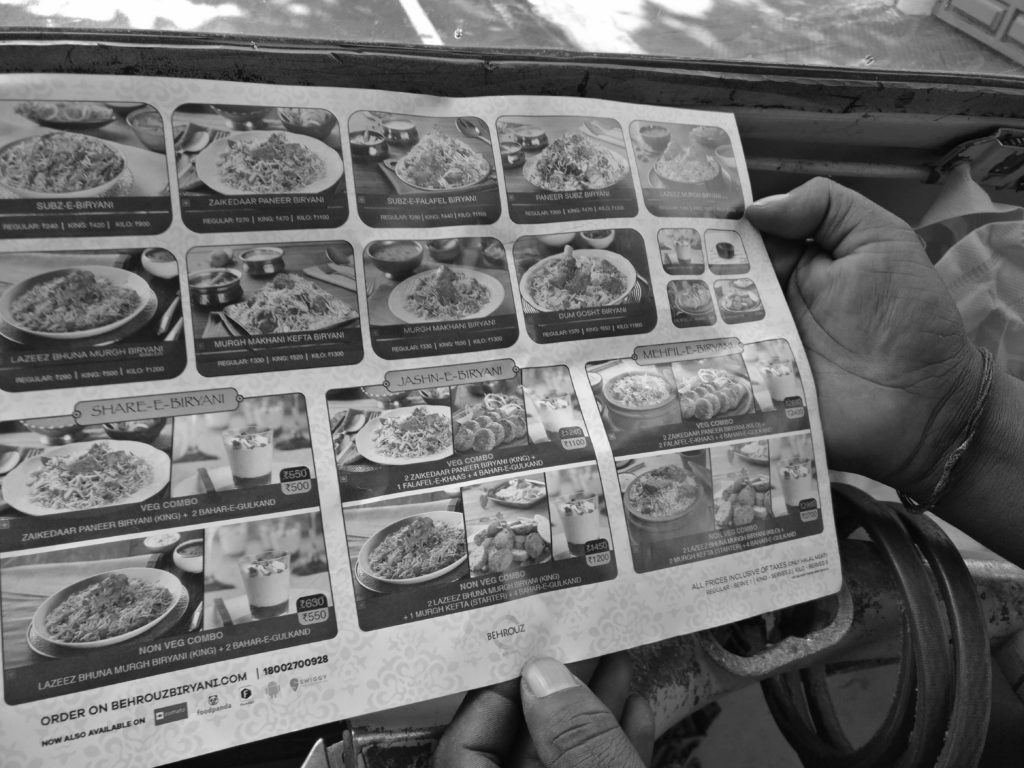 On his route, Adi picks out a takeout menu from the garbage and stares at it. “Look at how much this costs!” he remarks, “it’s probably for those returning from Gulf countries.”

“Hey Adi,” says Murthy, who sits precariously next to him in a moving auto, “how about you blow this month’s salary and take us out? No? Then chuck it.” 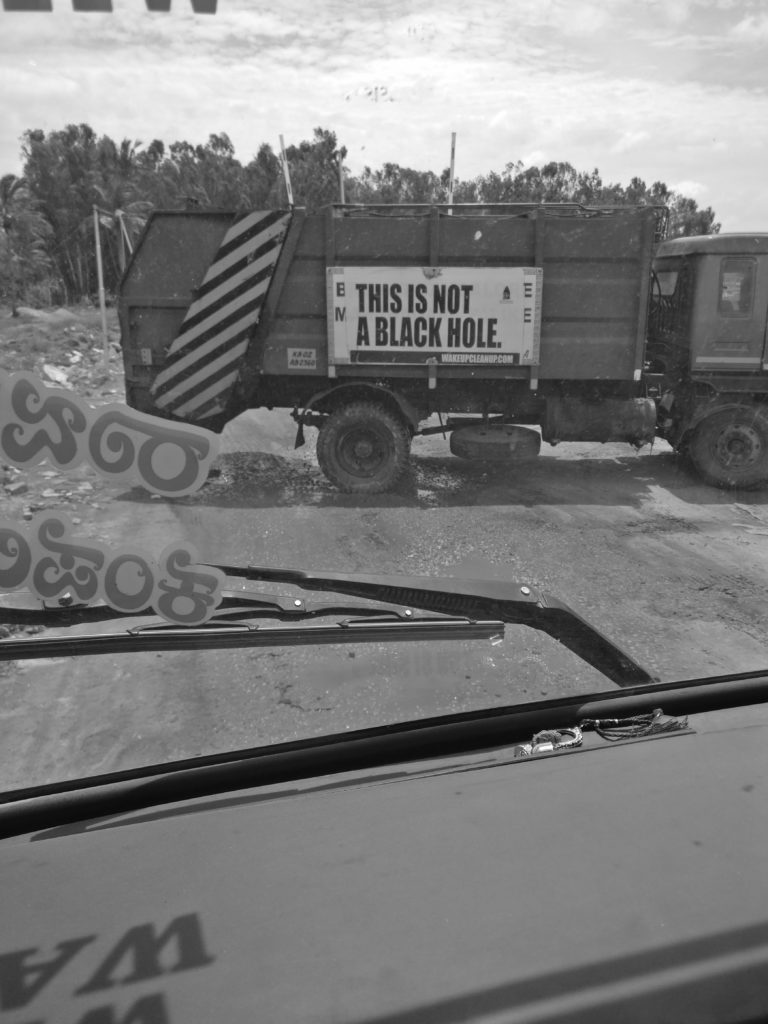 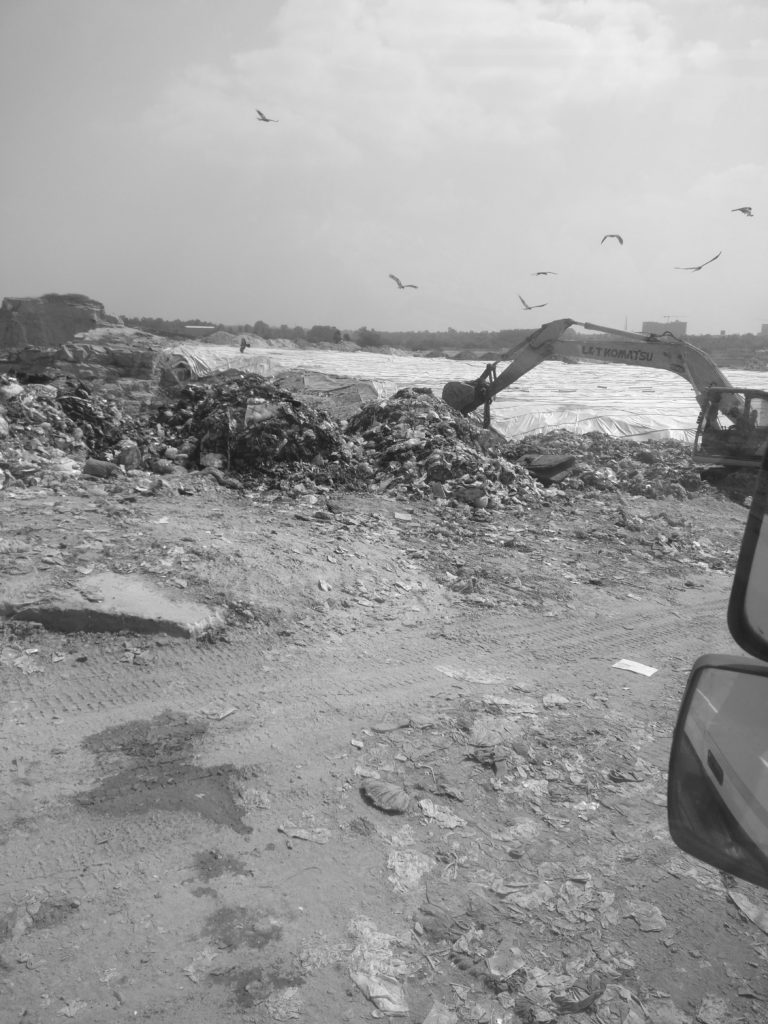 Bangalore has grown substantially in the last few decades. The tongues of the wealthy and the worldly sound out its name. They utter it to mark the city as a destination for low-cost solutions, for back-end support, for offshore expansion. They use these terms to signal that, when they arrive, they will not speak in our mother tongues. But they compel us to speak in theirs. Some of us learn their tongues to get a taste of their world, to move closer to it, forgetting our own.

Others don’t. Still, they can taste what has changed. 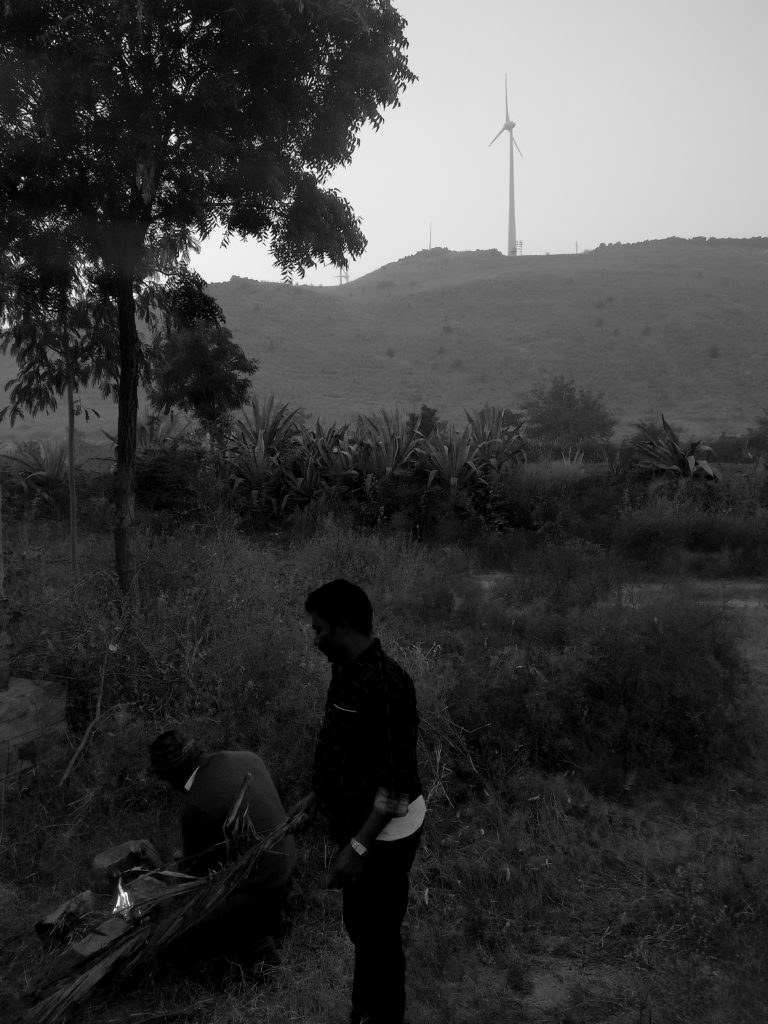 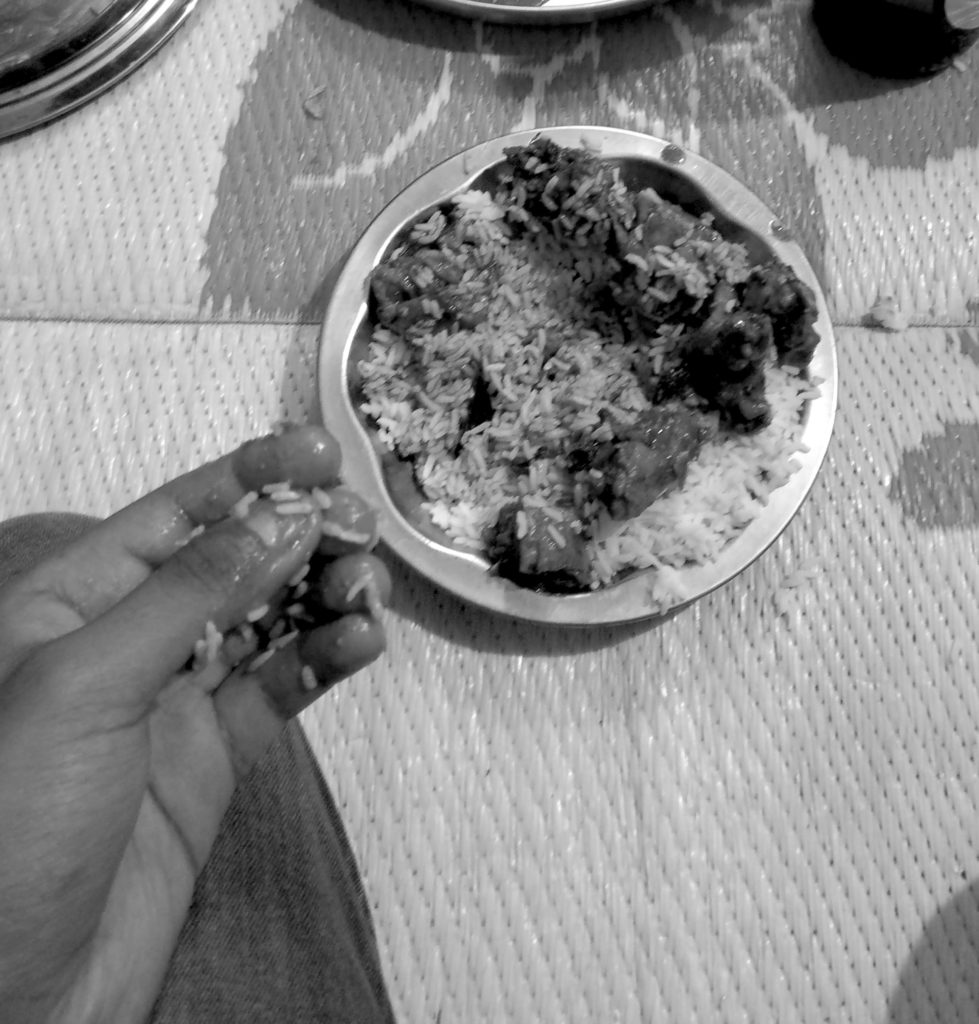 We are in Adi’s village in Penukonda, Andhra Pradesh. We sit out on a mat to face the wide open twilight sky, relishing spicy buffalo curry and local brew (henda).

There is a windmill in the distance: chronic drought clears the path for wind-power.

Chewing on a bone, I ask Adi, “how do you say bone (moole) in Telugu?”

“Emuka”, he responds. “Do people in your jaati eat buffalo? I thought it was only us.”

“Well, if my mother was around, you would have gotten a taste of some good cooking.”

Our mother tongues have yet to learn the words ‘late capitalism’. But their deep, serpentine histories have been shaped by the sound jaati (caste).

In Good Hands: Tactile Skill and the Care of Racehorses

Making a Neighborhood: Cow-Dung and Class in...