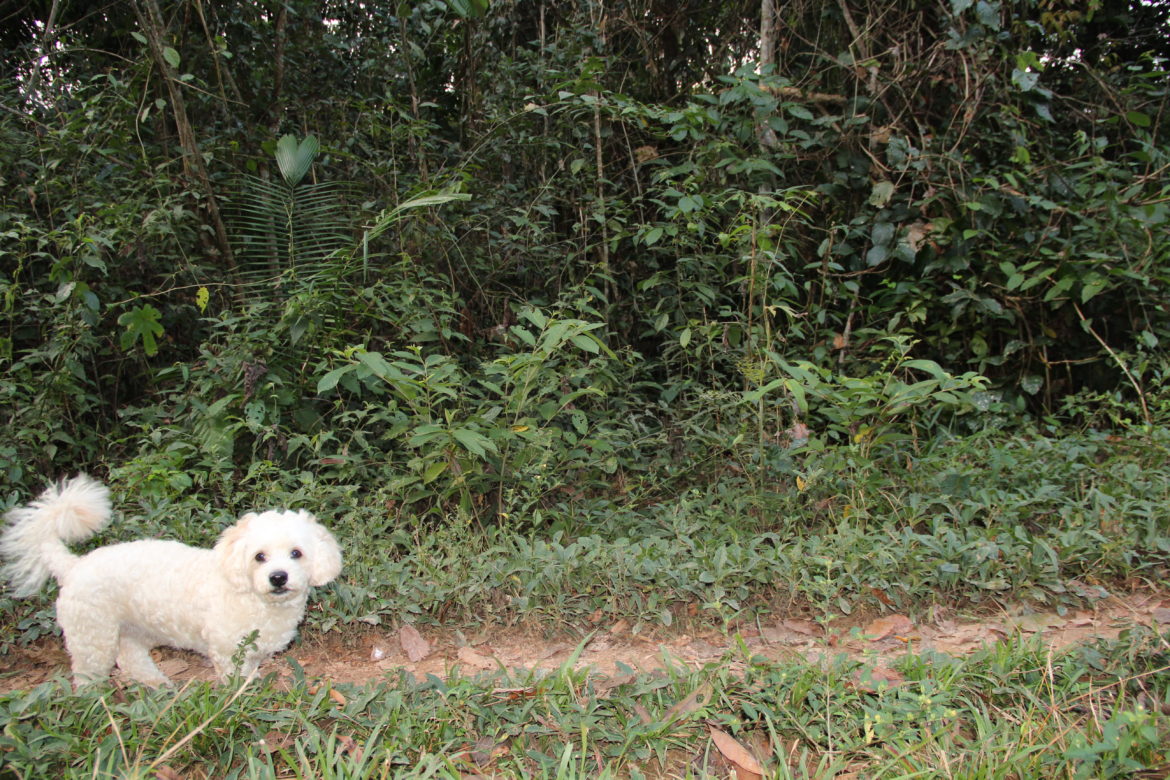 The Agricultural Co-Involution web series explores farming and food as multispecies relationships. Through essay, dialogue, art and story our contributors follow the traces of an ‘agriculture beyond the human’. If you’d like to contribute to the series or the upcoming zine, contact Jonathan at justjontanis@gmail.com 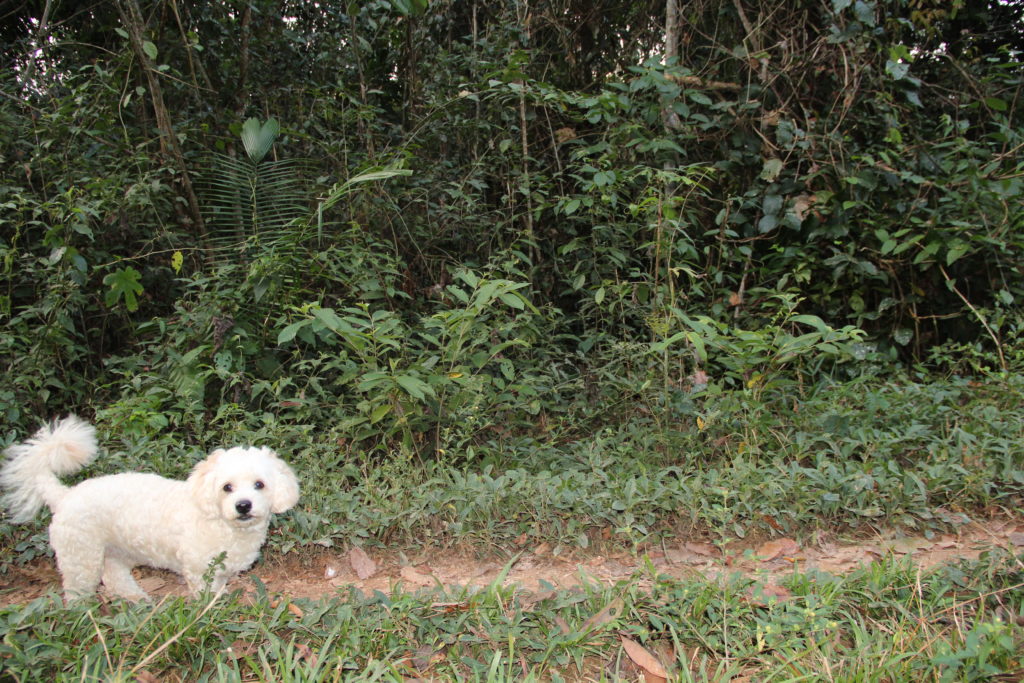 Jeff is in the House

University of California, Santa Barbara
Culture and Environment Lab
hoelle@anth.ucsb.edu
My name is Jeff. I am a human and an anthropologist.
Some of these details may seem excessive, but each plays an important role in the bewildering episode that I recount here.

As an anthropologist, I study human-environment relations in the Brazilian Amazon. The region is well known for research on the intermingling of human and animal forms and spirits, but recently I have been studying the relatively fixed boundaries between humans and non-humans. In the last few years I have come to a general understanding of how rural non-indigenous Amazonians distinguish themselves, conceptually and physically, from animals, but over the course of few days in August 2016 one dog messed up my schemas.

I arrived in the center of Seringal São João eager to see the rubber tappers with whom I had worked from 2007-2010. I soon learned that the family I used to stay with was no longer living there. The other families I knew lived scattered throughout the forest and would be difficult to reach before nightfall. Thankfully, there was a now a home in the center and the owners, Dona Maria and Seu Rocha, invited me to stay with them. Dona Maria lived in the city when I visited the community last time, but she had heard of me from her brothers, who I had accompanied on trips to tap rubber and weed their agricultural plot. Dona Maria and Rocha had moved here a couple of years ago and built this home.

When I entered their home, I saw something I had never seen before in the Amazonian countryside. A dog. Don’t get me wrong— there were plenty of dogs here, but they always stayed outside the house.

I contemplated the house dog as we sat on the porch and sipped sugared coffee, catching up on the latest developments in São João. As we talked, I scanned the dirt-packed yard with clumps of short grass that surrounded the house. Ducks and chickens circulated among fruit trees and scattered plants. This clearing, surrounded by forest and buffered by pasture, was the designated space of cultivated plants and domesticated animals. Regular grooming and sweeping ensured that venomous snakes and other undesirable bichos had nowhere to hide or propagate, and the yard also provide a good view to see who was coming.

Another dog was curled into a tight ball on the elevated platform— a stoop of sorts— attached to the front of the house. Such outside dogs alerted the inhabitants to the intrusion of wild or large domesticated animals, and visitors announced their presence from a distance. If a visitor or stranger was recognized or deemed acceptable by the inhabitants, they quieted down the dogs and invited the person to subir, or ascend to the house. The visitor would leave their dirty shoes on the stoop, next to the dog and pecking chickens, before proceeding to the porch through a little gate in the three-foot-high wall of vertical wooden slats. The strictly human sphere on the other side of the wall was subdivided according to which people might enter, from the open, semi-public porch to the more familiar living room and kitchen, and then the private bedroom.

Aside from brief chicken invasions and the occasional macaw or cat kept as a pet, the separation between humans and animals was maintained in almost all of the houses I had ever visited in rural Amazonia. But, then, there was a dog in this house. He was different, though. He was a pure bred (raça pura) poodle, they told me. He had elegant fluffy locks of white and a moist black nose. Dogs were rarely showered with scented shampoo or affection, but these behaviors were considered appropriate in this case because this was not just a dog. The poodle belongs to a new category— a “pet.” Dona Maria had been given the poodle when she lived in the city and when she and Rocha moved here they brought a new way of relating to animals with them. I was gradually getting a handle on how this made sense—as a transfer of categories and relations from the city.

But then Dona Maria told me the dog’s name: “Jeff.”

Human Jeff: “Really? But that is my name.”

Dona Maria assured me that this was a coincidence. To reinforce this and assuage my suspicion, she added: “I did not even know it was a human name.” When I later recounted the “coincidence” to others in Brazil, they wondered what I might have done to offend Dona Maria. But, as I said before, we did not really know each other and I wondered if anyone is São João even knew my name well enough to reproduce it. I was usually called by words starting with J that were more familiar or amenable to pronunciation in Brazilian Portuguese—“Jersy,” “Jerson,” “Jefferson,” or “Jeski.” When describing me, people might say “O Americano” and this was usually specific enough, but true recognition was achieved when descriptors were offered: carreca (bald), gordo (fat or stout), or grande (big).

They warned me on the first day that Jeff was valente and that I should not try to touch him. On the second day I forgot. I was sitting on a bench on the front porch, talking to Rocha, as Jeff came out from the living room. I didn’t think about it or even look in his direction when I reached to his head for a gentle nuzzle. The expectation cloud-like curls tickling my fingertips was instead met with the spiked rat trap that was Jeff’s mouth.

In the drizzly days that followed, we were all confined to the house for hours at a time. I kept a healthy distance from Jeff. One damp, gray afternoon, I was in my hammock on the porch writing up some observations, and slowly transitioning into a nap. The word “Jeff” gently floated in my direction from inside the house. Dona Maria continued in a honey-coated, carinhoso tone “come to the bedroom and lay down.” After a moment of frozen anxiety, I was thankful to hear the pattering of Jeff’s manicured claws in the direction of Dona Maria’s room.

On another occasion, Jeff went too far (I think he stole some human food). Dona Maria unloaded on him as she would a regular dog or a chicken: “Jeff, get out of here you son of a whore!” I knew these scalding words were not directed at me, but I could not help but feel that I should flee. The content of the sentence is disturbing to hear when it is directed at you, but it is the tone of this beast-expulsion voice that triggers a visceral response. The voice sounds something like the command used to exorcise demons in movies, but it is as if the possessed demon is speaking the command. Words are hurled in a low whisper-hiss that demands immediate action. The voice is not used on humans or wild animals, but only on domesticated, semi-cultured animals who understand the tone and what it portends, just as they do the feigned picking up and throwing of phantom rocks. This package of beast-voice and rock-pantomime sends dogs scurrying as if they were running on ice. Often, after a safe distance has been achieved, they look back with a low head and squinted eyes, eventually decelerating into a natural, cool lope that honestly seems forced. 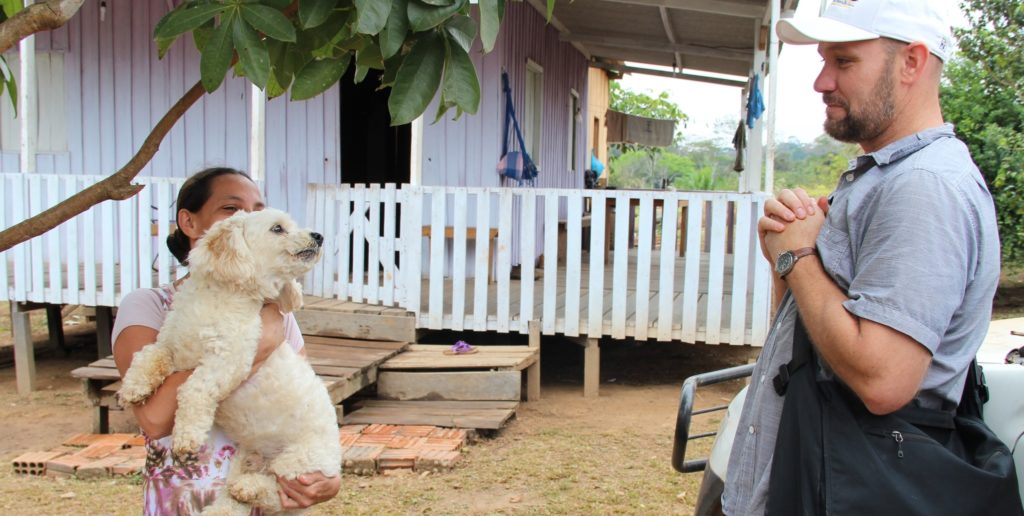 Jeff saying goodbye to Jeff and Dona Maria. In the background you can also see the part of the yard, stoop, the gate and fence surrounding the porch, and the hammock described in the text.

On the day I left, Dona Maria and Rocha came out to the yard to say goodbye. Dona Maria cradled Jeff in her arms. (She and especially Rocha also talked to Jeff using a baby voice that I had also not seen used with animals, or many babies, in rural communities). As I attempted a final hug goodbye, Jeff lunged at me one last time and I pulled back my bandaged finger and the rest of my person to a distance that allowed Jeff to stop growling and settle back into a comfortable pose. I waved farewell to Dona Maria, Rocha, and Jeff.

From Acre, I went to Belem to give a talk at the University. On the other side of the Amazon basin, I still thought of Jeff- my xará– (namesake, person [or animal?] with the same name). I wondered what he meant in terms of my research on categories and spaces, but also in terms of who I was as a person. I wondered if our fates were somehow intertwined and if a piece of me— something more than the flesh he gouged from my finger— stayed with him. I selfishly wished him longevity and continued comfort. Yet, I also imagined a day when he Jeff would unwisely stray from his human spaces and protectors and find himself surrounded by a party of resentful porch dogs or wild animals.

I could ponder these things now that I was alone, in my own space— the only Jeff in the house. I was actually in a hotel, and one afternoon I took the stairs down from the 12th floor: ~15 steps down; turn 180 degrees, ~15 steps down, repeat. On each landing, some sort of repair had been made and covered with white paint, and the form of multiple random patches of paint? Jeff. Is he dancing out of joy or performing for a treat? Is he shifting to bipedal Jeff? To this day, I still see traces of the Amazon house poodle and each time I wonder: who or what, exactly, is Jeff? 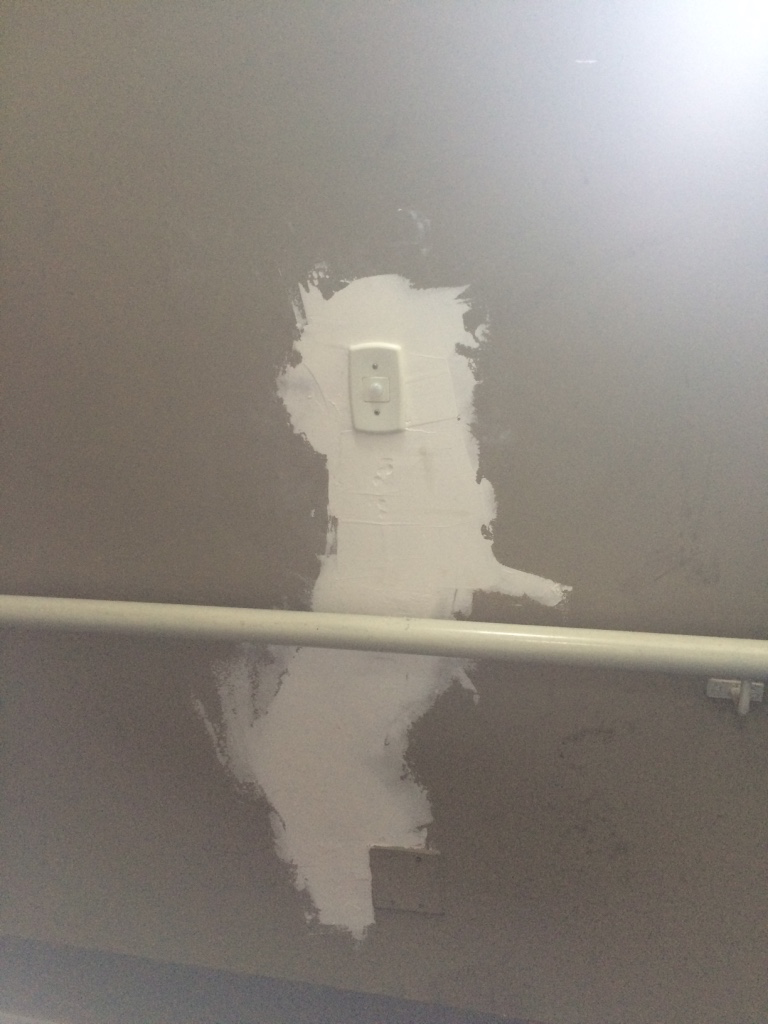 A paint splotch that resembles Jeff the dog in a hotel in Belem, Brazil.

Agricultural Co-Involution: If On a Late Fall...