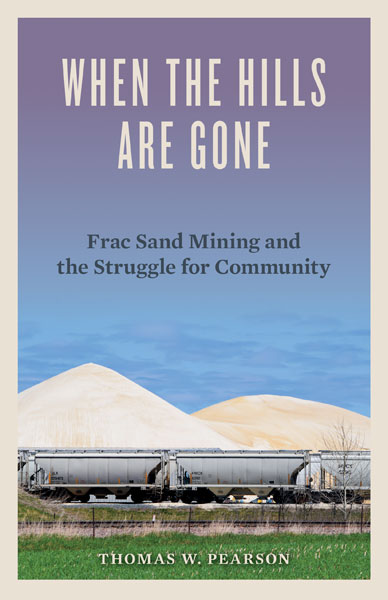 This interview is part of CAFE’s new series of interviews with authors of past CAFE articles. By conversing with authors about the ways their article came about, the challenges they faced in the research and/or writing process, and the ways the issue the article addresses has changed or shifted since publication we aim to provide a space for more informal discussion of the issues human/environment scholars face in research and writing while learning about how specific issues have changes in recent years. These first interviews are with authors from our June 2013 special issue on the anthropology of energy, titled “Hazards So Grave: Anthropology and Energy.”

This first interview is with Thomas Pearson, an Associate Professor in the Social Sciences Department at University of Wisconsin-Stout, who wrote “Frac Sand Mining in Wisconsin: Understanding Emerging Conflicts and Community Organizing.”

For the past decade, I have been drawn to questions about environmental conflicts and their relationship to shifting meanings of place and democracy, themes I first explored through my doctoral research in Costa Rica, which focused on environmental activism around genetically modified seeds, intellectual property rights, and free trade agreements. When I began researching frac sand mining in Wisconsin, I initially sought to document grassroots organizing in response to a new extractive industry. At the time, it felt tremendously different from my experiences in Costa Rica. Looking back, I’m struck by how themes of activism, place, and democracy have been prominent in both projects.

In 2009 I began teaching at the University of Wisconsin-Stout, located in rural western Wisconsin. During my first couple years I periodically heard about sand mining, but I knew nothing of its connection to hydraulic fracturing. In May 2011, a good friend of mine who lives in Morgantown, WV, sent me a picture of himself and his daughter at a demonstration against fracking. Then that fall, Gasland was screened at my university. I attended out of curiosity and afterwards several community members spoke passionately about frac sand mining and a proposed mining operation in my community. I began attending town meetings, initially as a concerned citizen, and it quickly evolved into a research project lasting nearly five years.

Yes, definitely. In 2013, I was trying mostly to wrap my mind around an unprecedented and explosive issue and contribute an anthropological perspective to the ongoing public discussion. As activism in my community evolved and declined, my ethnographic research broadened to look at how people cope with industrial mining activity near their home, which I talk about in “Frac Sand Mining and the Disruption of Place, Landscape, and Community in Wisconsin,” published in Human Organization. I have also written a book titled When the Hills Are Gone: Frac Sand Mining and the Struggle for Community, due out this November with the University of Minnesota Press.

The industry continued to expand rapidly until about 2015. Many towns adopted ordinances asserting local regulatory control and in response the industry has pushed for state preemption of local authority, a phenomenon that has occurred in many states in relation to hydraulic fracturing and other issues. In 2016, the continued decline of oil prices erased demand for Wisconsin frac sand, sending the industry into a tailspin. Many operations stalled or went under. Things are beginning to come back this year, however, as oil prices tic upward and demand grows. After one boom and bust cycle, we appear to be on the cusp of another phase of frac sand mining development.

In my forthcoming book, I try to show that very complex struggles play out at the local level. In general, towns where residents are organized have been more successful in stopping mining, or at least asserting regulatory control. I also examine, however, how the industry has cultivated sometimes problematic ties with town officials and community leaders, as well as engineering firms, university centers, and law offices. To circumvent local opposition, mining companies have pursued strategies that include everything from lobbying and financial donations to lawsuits and annexation. Changes at the state level are also having a significant impact. Governor Scott Walker has consistently eroded the regulatory capacity of the DNR and the Republican-dominated legislature has moved to reduce local control over land use decisions, though state preemption has been controversial and piecemeal.

They were not so much “prescriptions” as observations of promising trends. Concerned citizens have definitely rallied around the defense of local control, largely in response to industry lobbying for state preemption. Several groups have also developed ties to the community rights movement, which seeks to move beyond reactionary, single-issue organizing and frames activities such as frac sand mining within a larger critique of corporate power. Local groups such as the Save the Hills Alliance have also broadened their focus, and connections with national anti-fracking, alternative energy, and democracy movements are being made through organizations such as FracTracker Alliance and activities such as the Democracy Convention.

The article became a jumping off point for my forthcoming book, which allowed me to delve more deeply into stories about grassroots organizing, conflicts over place identity, the experiences of people whose lives have been upended, the tactics used by mining companies to overcome local opposition, and the frustrations of concerned citizens who try to confront corporate power within local democratic decision-making bodies. I think other stories could be told about this issue, especially stories about the experiences of people who work in the industry and benefit from mining. Their voices and perspectives do appear in the book, but they are not a central focus.

I would like to add some backstory to this article’s appearance in CAFE. The article originated with a 2012 AAA panel organized by Anna Willow and chaired by Jeanne Simonelli, who along with Stephane Paladino encouraged panelists to submit papers to CAFE to be published as editor-reviewed research reports: short pieces that comment on ongoing research and current issues. The idea was to get anthropological analysis, backed by the status of an academic journal, out into the public domain in a timely fashion. I wrote this article with a general audience in mind and sought to minimize the theory sloganeering and nonsensical scholarly dribble that spoils so much of academic anthropology today. According to various metrics, this article is the most impactful academic piece I’ve ever written, circulating widely in western Wisconsin. Despite also being freely available on other websites, it has garnered nearly 2,000 views on Academia.edu, largely from non-academics. (By contrast, an article I published in American Anthropologist in 2013 on my Costa Rica research has achieved a measly 46 views.) That’s not to say academics have ignored my work. According to Google Scholar, it is also my most cited piece, and AnthroSource indicates it is the most cited article in CAFE over the past five years.

The Journey of an Ancestral Seed: The Case of the Lupino Paisano Food Network in Cotopaxi, Ecuador